The fifth edition of the avant-garde festival Soulbönding Trip. This year, the alternative festival in Soulkostel in the Broumov region invites you to three days of alternative music of fringe genres such as psychedelic rock, black metal, drone, noise, ambient or dark folk. And as always, the second weekend in September - this time 8 - 10 September.

The concert space called Soulkostel is a well-known name among fans of underground music. It's a formerly abandoned ruin of a German church near Vernéřovice, which a group of enthusiasts have turned into a cult concert space where, despite its remote location, dozens of loyal and occasional visitors come to perform. Soulbönding Trip offers a selection of several bands from the Czech dark underground, international guests, subtle music as a background for an inspiring sleep, liquid light shows inside and outside the church walls directed by visual artists Weird Visuals. There will also be art or music workshops, lectures, a bar and homemade food.

Let's get in the the mood with our official Spotify playlist!

Swampy chillout all day and all night!

Seems like we'll have some festival merch to sell. 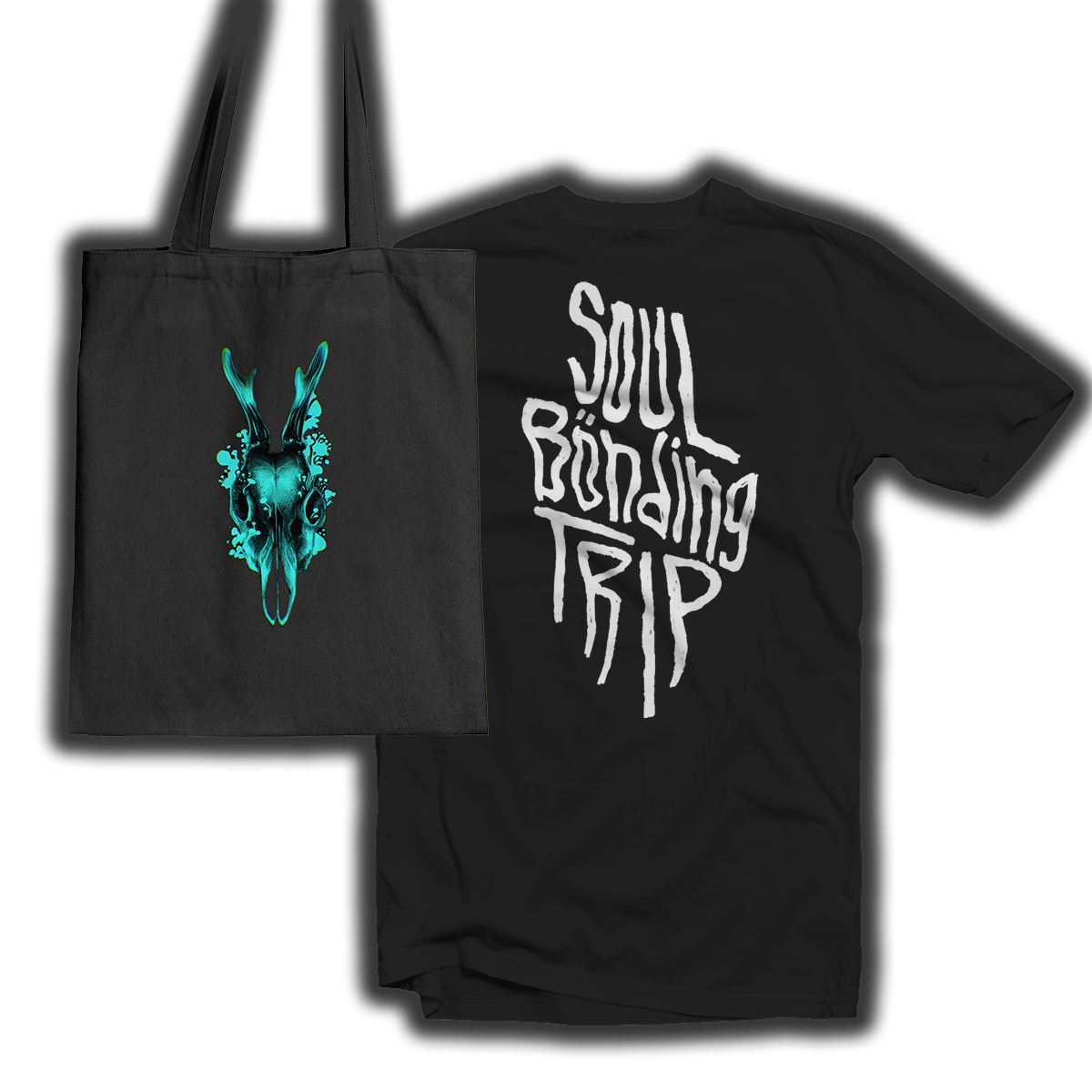 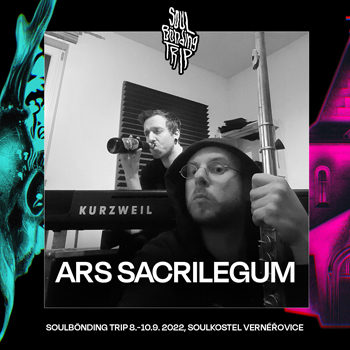 Another premiere of this year. Duo Olaf Olafsonn (flute) and Vojtěch Libich (piano) will present a new project of avantgarde classical music. And it’s a great honour for us to host their first public performance!

Furia, Thaw, Gruzja, Arrm… These are the many faces of the prolific artist Artur Ruminski who has already visited Soulbonding Trip with Arrm. This year he will fill the space of the Church with his psychedelic-ambient soundscapes as a solo artist.

Bön are inseparable with Soulbönding Trip not only because they were there at the beginning, but also because of their unique approach to music bringing it close to a shamanic ritual. Get entranced with them again on this year's rendition of the festival. Apart from their set Bön will also perform in traditional collaboration with Olaf Olafsonn and the Big Bad Trip!

Band that's really not a band, more like an anonymous meeting of the minds veiled in obscurity producing post-industrial, psychedelic electronics or even almost shamanic dark ambient. They will surely fit in the woods around the Church nicely.

It is a great privilege for Soulbönding Trip to host the first Czech gig of the true psychedelic superstars that are Electric Moon. Although this band does not need a long introduction, we will just remind you what to look forward to: hypnotic bass lines, thick soundscapes and enthralling vibes. Can't wait!

Jeden Kmen will fill the Church ambience with the meditative sounds of their unique brand of tribal folk with some electronic touches here and there. They are very fond of Soulbönding Trip and those warm feelings are very mutual, so we're very happy to welcome them for the second time, this time they will treat us with a live premiere of songs from their upcoming album called Basnj - to be released in the fall! !

For these local musicians, the Church is a second home. Kosmiku play modern psychedelic music that is quite unique in this neck of the woods (plus they’re a family!).

Foul slow riffs of Můra will bring the stench of decay and the sound of ruin to the Church. This supergroup of death - doom scene with members of Voluptas, Sekeromlat, Brauncholda or The Tower released their debut cassette Doom Invocations and Narcotic Rituals on US label Caligari Records last year and they're coming to cover this year's Soulbönding Trip in filth!

You can't talk about Soulbönding Trip without the name Olaf Olafsonn and the Big Bad Trip immediately coming to mind. Since their acoustic record Selenopolis, they have entered the waters of psychedelic swamp folk and have been sailing these ever since. Apart from their set they will also perform in traditional collaboration with Bön!

Fog, long riffs, delay and a voice from the beyond. Opium Warlock is the new blood of our psychedelic doom scene, which flows like the river Acheron into the underworld. Their show with Polish stoners Belzebong in Prague was truly unbelievable and we're sure that they're gonna fit in just great in the middle of the woods.

Roky Krysta is one of the first pure electronic music festival, that showed up on festival during past four years. Church and near surroundings will rumble to the harsch beats and uncompromising synthesizers!

We start on a dark note this year: with Prague-based black metal outfit Sekeromlat! They will bring not only rawness, desecration and darkness but also their brand new record Drápy a Tesáky!

After their last shockingly avantgarde show on Soulbönding Trip, Smoggg are coming back to the Church after two years. This polish experimental take on The Birthday Party vibes is calling their genre swampcore and one thing is for sure - you never know what to expect from their performance!

From ambient, martial industrial, dungeon synth to black metal. One man project Vyšehrad is one of the regulars on Soulbönding Trip festival and this year will bring his new album .​:​tunely / tunnels​:​.

Soulbönding Trip was never music only festival. It’s a gathering for all senses. Group of visual artists Weird Visuals was there almost from the beginning and each year they deliver more and more lights into the forest church and this year will be no exception!

Harsh electronic, break core, death metal… Yarrdesh is another performer, who are not afraid to experiment sonically and can’t be put into only one music genre. And even for us it is still mystery, with which he will surprise us near the Vernéřovice forest spring…

"When everyone else will die, they will bury the corpses and lay down, waiting for the ends of things."

A sneak peek into the dark recesses of the infantile world of one peculiar figure of Prague’s underground scene. Recommended for: Prague residents, dogs, Poles, children.

Weird Visuals are not only masters of light on the festival, but they will be organising the cyanotype workshop - again!

Inseparable part of Soulbönding’s non-musical programme always were afternoon workshops. This years we expand with a option to make something small from leather with Rez, who participated for example with festival Junktown!

For the first time in history of Soulbönding Trip we will open a landart gallery in the forest in front of the church. This gallery will grow organically during the festival under the guidance of sculptress Sikra and her friends. Everybody can join and have his own natural artwork among the trees!

Far from the church and the loud music in the forest you can rest and try drumming in the shamanic circle under the leadership of Johny Yul of Bön!

For the first time on Soulbönding Trip this year during the non-musical programme will take place an ethnographic walk. The topic would be Vernéřivice of course and it will be lead by experienced ethnographer and anthropologist Olaf. Let's meet in front of the church!

Experienced beer drinker, Martin Ziky Zikán, will present the best techniques for drinking beer, explain how to become an alcoholic as quickly as possible and conclude with a debate on whether the communists are bastards.

And a light snack to you beer! Soulbönding Trip always offered home cuisine with focus on local ingredients and it won't change this year. What will change is that we are opening a new Daemon Diner right in front of the church!

As usual the beer of the festival will be almost the whole repertory of Pivovar Trautenberk! This year for the first time also with their new sour beer and we have one beer surprise in our sleeve!

Buy in advance through GoOut

Feel free to ketamine us